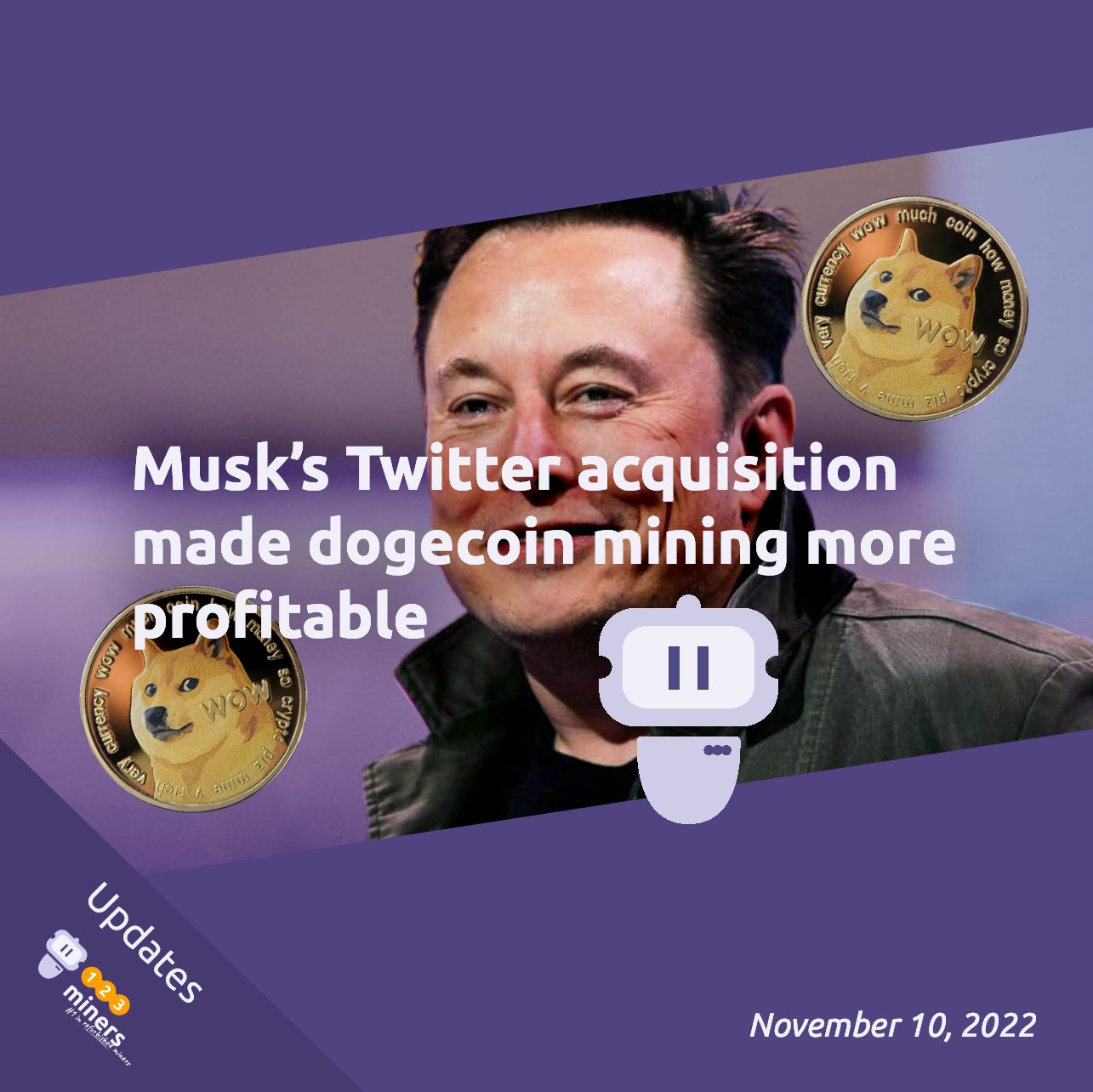 Dogecoin (DOGE) is once again taking the stage in the crypto industry. The meme cryptocurrency gained value after the news broke that Elon Musk bought the social media platform Twitter. So how are these two linked, and why does it affect the profitability of dogecoin mining? Musk is a Dogecoin fan But first, a short […]

Dogecoin (DOGE) is once again taking the stage in the crypto industry. The meme cryptocurrency gained value after the news broke that Elon Musk bought the social media platform Twitter. So how are these two linked, and why does it affect the profitability of dogecoin mining?

Musk is a Dogecoin fan

But first, a short introduction to Dogecoin. The so-called “meme cryptocurrency” was launched in December 2013 by two software engineers, Jackson Palmer and Billy Markus. Looking at the current value of DOGE, you may be surprised to hear that the launch was initially meant as a joke. The mascot of the ecosystem is a Shiba Inu dog emphasizing the meme status it has.

Dogecoin originally forked from the cryptocurrency called Luckcoin, which forked from Litecoin (LTC). This means that the Dogecoin blockchain runs on a Scrypt algorithm to process transactions and secure the blockchain. This protocol makes the network faster in terms of transaction speed, but notably, DOGE has no maximum supply.

In 2021, Tesla founder and billionaire Elon Musk announced in a tweet he was a Dogecoin fan. His electric car company even accepts the altcoin as a means of payment for Tesla merchandise. Later, in 2022, Musk reiterated his support for the meme coin, which is why DOGE is standing in the spotlight again.

The reason why Dogecoin is gaining a lot of popularity among investors right now is the fact that Musk bought Twitter. Coincidentally, Twitter is the platform on which Musk tweets vague tweets now and then, for example, the tweet below. In the tweet, he shows his dog (a Shiba Inu dog) wearing a t-shirt with the Twitter logo. This suggests that Musk is looking to add the cryptocurrency to the platform. This, however, is still based on speculation.

We base our dogecoin mining revenue estimation on the Bitmain Antminer L7. This DOGE miner generates a hash rate of 9.16 gigahashes per second (Gh/s) at a consumption of 3,425 watts. Based on that figure, a dogecoin miner generates $21.26 per 24 hours. When we deduct the estimated average energy price of $0,17 per kilowatt-hour, the profit amounts to $7,29 per day.

Due to the current environment of the bitcoin mining industry, it is more challenging to be profitable as a bitcoin miner. The reason for this is the rising energy prices and mining difficulty. So, in many cases, mining dogecoin may be more profitable. This is a surprising development in the world of crypto mining!

Do you want to mine dogecoin and earn DOGE? Then, take a look at our dogecoin miners. If you need help or have any questions, feel free to contact our customer service department.

END_OF_DOCUMENT_TOKEN_TO_BE_REPLACED

Even though the crypto market may be in rough waters at the moment, the mining manufacturers continue to develop their products. Last month the...

END_OF_DOCUMENT_TOKEN_TO_BE_REPLACED
We use cookies to ensure that we give you the best experience on our website. If you continue to use this site we will assume that you are happy with it.AcceptPrivacy Policy